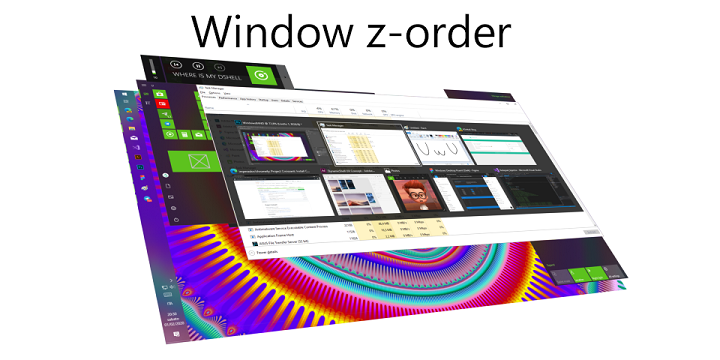 For clarity, in this context the word “band” means group of z-orders

Starting from Windows 8, Microsoft “introduced” other bands, and all of them are higher z-orders than the desktop band. For example the start menu is on ZBID_IMMERSIVE_MOGO. Task manager “always on top” is on ZBID_SYSTEM_TOOLS. These are always on top of any window in the ZBID_DESKTOP band, that is, any normal or topmost window created by third parts developers will no longer cover start menu and stuff. These bands cannot mix each other, meaning, for example, that ZBID_DESKTOP will never be on top of ZBID_IMMERSIVE_MOGO, that is, bands have their z-orders too.

Like ZBID_DESKTOP, other bands also can be subdivided in 2 groups: normal and topmost window.

The order of bands are the following, from the lowest to the highest z-order (some ZBID orders are unknown for me ATM):

ZBID_DESKTOP: this band is where all our window stays on. Let’s suppose you have 2 window here, Paint and Photos. Both are desktop windows, and they can overlap each other by just focusing a window or another. Now suppose that Paint window is topmost, now it will stay on top of Photos, regardless of its focus state.

ZBID_ABOVELOCK_UX: used by “Playing Now”. This band and anything else higher will stay on top of the lock screen.

Since posting all ZBIDs would make this post XXL….

This is a private api function found in user32.dll. Since it’s not present in Windows SDK headers/libs, you have to use GetProcAddress to get access to that function.

CreateWindowInBand function is the same as CreateWindowEx except it has 1 more parameter, dwBand, that is where you specify the band on which the window should stay (ZBID).

SetWindowBand function has 3 parameters, hWnd, hWndInserAfter and dwBand. Same as 2 first parameters from SetWindowPos. The returned value indicates success or failure. In case of failure call GetLastError. I’m 99.9% sure you got a nice 0x5 (ACCESS DENIED)

GetWindowBand function has 2 parameters, hWnd and pdwBand. pdwBand is a pointer that receives the band (ZBID) of the HWND. The returned value indicates success or failure. In case of failure call GetLastError.

Can I call these APIs?

Short reply: Some yes (under certain conditions), some no.

Why I can’t call using other ZBIDs?

Because Microsoft added extra checks for these bands.

For CreateWindowInBand/Ex, to be able to use more ZBIDs, the program must have a special PE header, named “.imrsiv” ( bss_seg), flagged with IMAGE_DLLCHARACTERISTICS_FORCE_INTEGRITY and be signed with a Microsoft certificate “Microsoft Windows”.

For SetWindowBand, well… currently I don’t know how this works internally, but it has extra checks. Explorer calls it via twinui.pcshell.dll

This function lets change the band of a window and, for Windows Explorer’s case, bring the taskbar from ZBID_DESKTOP to ZBID_IMMERSIVE_MOGO (and vice versa).

Is there a way to bypass it? You did it, so I guess yes?

Yes…ish. You will not like the way I did it but that’s (currently) the only way.

Starting from Windows 8 Microsoft “introduced” the concept of band, a group of z-order that they will never “touch” each other. There are many bands but for developers, only ZBID_DESKTOP (default band for CreateWindow/Ex) is accessible.

This site uses Akismet to reduce spam. Learn how your comment data is processed.

Enable Notifications    OK No thanks